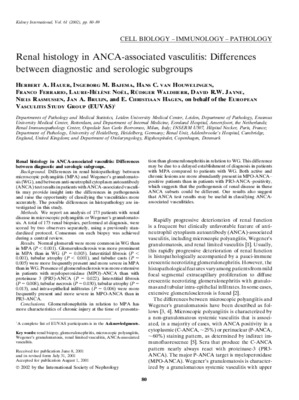 Renal histology in ANCA-associated vasculitis: Differences between diagnostic and serologic subgroups.BackgroundDifferences in renal histopathology between microscopic polyangiitis (MPA) and Wegener's granulomatosis (WG), and between anti-neutrophil cytoplasm autoantibody (ANCA) test results in patients with ANCA-associated vasculitis may provide insight into the differences in pathogenesis and raise the opportunity of classifying the vasculitides more accurately. The possible differences in histopathology are investigated in this study.MethodsWe report an analysis of 173 patients with renal disease in microscopic polyangiitis or Wegener's granulomatosis. A total of 173 renal biopsies, performed at diagnosis, were scored by two observers separately, using a previously standardized protocol. Consensus on each biopsy was achieved during a central review.ResultsNormal glomeruli were more common in WG than in MPA (P < 0.001). Glomerulosclerosis was more prominent in MPA than in WG (P = 0.003). Interstitial fibrosis (P < 0.001), tubular atrophy (P < 0.001), and tubular casts (P = 0.005) were more frequently present and more severe in MPA than in WG. Presence of glomerulosclerosis was more extensive in patients with myeloperoxidase (MPO)-ANCA than with proteinase 3 (PR3)-ANCA (P = 0.022). Interstitial fibrosis (P = 0.008), tubular necrosis (P = 0.030), tubular atrophy (P = 0.013), and intra-epithelial infiltrates (P = 0.006) were more frequently present and more severe in MPO-ANCA than in PR3-ANCA.ConclusionsGlomerulonephritis in relation to MPA has more characteristics of chronic injury at the time of presentation than glomerulonephritis in relation to WG. This difference may be due to a delayed establishment of diagnosis in patients with MPA compared to patients with WG. Both active and chronic lesions are more abundantly present in MPO-ANCA–positive patients than in patients with PR3-ANCA–positivity, which suggests that the pathogenesis of renal disease in these ANCA subsets could be different. Our results also suggest that ANCA test results may be useful in classifying ANCA-associated vasculitides