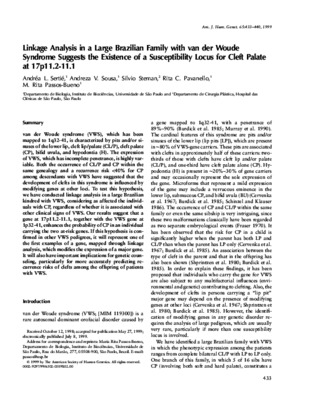 Linkage Analysis in a Large Brazilian Family with van der Woude Syndrome Suggests the Existence of a Susceptibility Locus for Cleft Palate at 17p11.2-11.1

Summaryvan der Woude syndrome (VWS), which has been mapped to 1q32-41, is characterized by pits and/or sinuses of the lower lip, cleft lip/palate (CL/P), cleft palate (CP), bifid uvula, and hypodontia (H). The expression of VWS, which has incomplete penetrance, is highly variable. Both the occurrence of CL/P and CP within the same genealogy and a recurrence risk <40% for CP among descendants with VWS have suggested that the development of clefts in this syndrome is influenced by modifying genes at other loci. To test this hypothesis, we have conducted linkage analysis in a large Brazilian kindred with VWS, considering as affected the individuals with CP, regardless of whether it is associated with other clinical signs of VWS. Our results suggest that a gene at 17p11.2-11.1, together with the VWS gene at 1p32-41, enhances the probability of CP in an individual carrying the two at-risk genes. If this hypothesis is confirmed in other VWS pedigrees, it will represent one of the first examples of a gene, mapped through linkage analysis, which modifies the expression of a major gene. It will also have important implications for genetic counseling, particularly for more accurately predicting recurrence risks of clefts among the offspring of patients with VWS