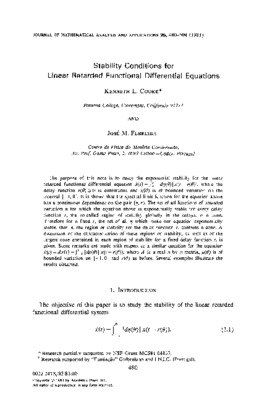 By Kenneth L Cooke and JoséM Ferreira
Get PDF (1 MB)

AbstractThe purpose of this note is to study the exponential stability for the linear retarded functional differential equation ẋ(t) = ∫−10 [dη(θ)] x(t − r(θ)), where the delay function r(θ) ⩾ 0 is continuous and η(θ) is of bounded variation on the interval [−1, 0]. It is shown that the spectral limit function for the equation above has a continuous dependence on the pair (η, r). The set of all functions of bounded variation η for which the equation above is exponentially stable for every delay function r, the so-called region of stability globally in the delays, is a cone. Therefore for a fixed r, the set of all η which make our equation exponentially stable, that is, the region of stability for the delay function r, contains a cone. A discussion of the characterization of these regions of stability, as well as of the largest cone contained in each region of stability for a fixed delay function r, is given. Some remarks are made with respect to a similar question for the equation ẋ(t) = Ax(t) + ∫− 10 [dμ(θ)] x(t−r(θ)), where A is a real n by n matrix, μ(θ) is bounded variation on [−1, 0] and r(θ) as before. Several examples illustrate the results obtained