From space weather toward space climate time scales: Substorm analysis from 1993 to 2008

Magnetic activity in the Northern Hemisphere auroral region was examined during solar cycles 22 and 23 (1993–2008). Substorms were identified from ground-based magnetic field measurements by an automated search engine. On average, 550 substorms were observed per year, which gives in total about 9000 substorms. The interannual, seasonal and solar cycle-to-cycle variations of the substorm number (Rss), substorm duration (Tss), and peak amplitude (Ass) were examined. The declining phases of both solar cycles 22 and 23 were more active than the other solar cycle phases due to the enhanced solar wind speed. The spring substorms during the declining solar cycle phase (∣Ass,decl∣ = 500 nT) were 25% larger than the spring substorms during the ascending solar cycle years (∣Ass,acs∣ = 400 nT). The following seasonal variation was found: the most intense substorms occurred during spring and fall, the largest substorm frequency in the Northern Hemisphere winter, and the longest-duration substorms in summer. Furthermore, we found a winter-summer asymmetry in the substorm number and duration, which is speculated to be due to the variations in the ionospheric conductivity. The solar cycle-to-cycle variation was found in the yearly substorm number and peak amplitude. The decline from the peak substorm activity in 1994 and 2003 to the following minima took 3 years during solar cycle 22, while it took 6 years during solar cycle 23.Peer reviewe 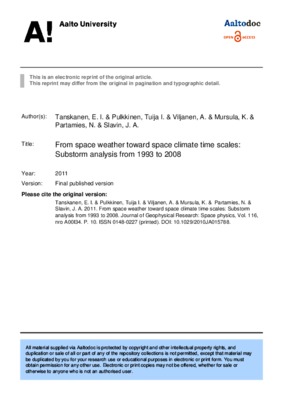 This paper was published in Aaltodoc Publication Archive.