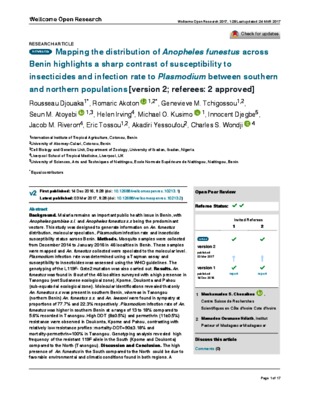 Mapping the distribution of Anopheles funestus across Benin highlights a sharp contrast of susceptibility to insecticides and infection rate to Plasmodium between southern and northern populations.

Background Malaria remains an important public health issue in Benin, with Anopheles gambiae s.l. and Anopheles funestus s.s being the predominant vectors. This study was designed to generate information on An. funestus distribution, molecular speciation, Plasmodium infection rate and insecticide susceptibility status across Benin. Methods Mosquito samples were collected from December 2014 to January 2016 in 46 localities in Benin. These samples were mapped and An. funestus collected were speciated to the molecular level. Plasmodium infection rate was determined using a Taqman assay and susceptibility to insecticides was assessed using the WHO guidelines. The genotyping of the L119F- Gste2 mutation was also carried out. Results An. funestus was found in 8 out of the 46 localities surveyed with a high presence in Tanongou (wet Sudanese ecological zone), Kpome, Doukonta and Pahou (sub-equatorial ecological zone). Molecular identifications revealed that only An. funestus s.s was present in southern Benin, whereas in Tanongou (northern Benin) An. funestus s.s. and An. leesoni were found in sympatry at proportions of 77.7% and 22.3% respectively. Plasmodium infection rate of An. funestus was higher in southern Benin at a range of 13 to 18% compared to 5.6% recorded in Tanongou. High DDT (8±0.5%) and permethrin (11±0.5%) resistance were observed in Doukonta, Kpome and Pahou, contrasting with relatively low resistance profiles: mortality-DDT=90±3.18% and mortality-permethrin=100% in Tanongou. Genotyping analysis revealed high frequency of the resistant 119F allele in the South (Kpome and Doukonta) compared to the North (Tanongou). Discussion and Conclusion The high presence of An. funestus in the South compared to the North could be due to favorable environmental and climatic conditions found in both regions. A significant Plasmodium infection rate was recorded across the country. A high resistance profile was recorded in the southern Benin; this raises the need for further investigations on resistance selection factors