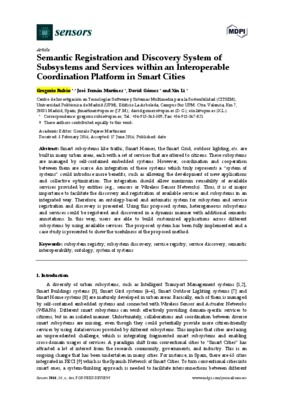 Smart subsystems like traffic, Smart Homes, the Smart Grid, outdoor lighting, etc. are built in many urban areas, each with a set of services that are offered to citizens. These subsystems are managed by self-contained embedded systems. However, coordination and cooperation between them are scarce. An integration of these systems which truly represents a “system of systems” could introduce more benefits, such as allowing the development of new applications and collective optimization. The integration should allow maximum reusability of available services provided by entities (e.g., sensors or Wireless Sensor Networks). Thus, it is of major importance to facilitate the discovery and registration of available services and subsystems in an integrated way. Therefore, an ontology-based and automatic system for subsystem and service registration and discovery is presented. Using this proposed system, heterogeneous subsystems and services could be registered and discovered in a dynamic manner with additional semantic annotations. In this way, users are able to build customized applications across different subsystems by using available services. The proposed system has been fully implemented and a case study is presented to show the usefulness of the proposed method