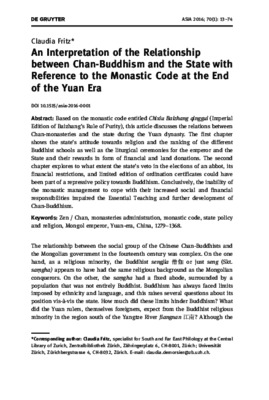 By Claudia Fritz
Get PDF (4 MB)

Based on the monastic code entitled Chixiu Baizhang qinggui (Imperial Edition of Baizhang’s Rule of Purity), this article discusses the relations between Chan-monasteries and the state during the Yuan dynasty. The first chapter shows the state’s attitude towards religion and the ranking of the different Buddhist schools as well as the liturgical ceremonies for the emperor and the State and their rewards in form of financial and land donations. The second chapter explores to what extent the state’s veto in the elections of an abbot, its financial restrictions, and limited edition of ordination certificates could have been part of a repressive policy towards Buddhism. Conclusively, the inability of the monastic management to cope with their increased social and financial responsibilities impaired the Essential Teaching and further development of Chan-Buddhism