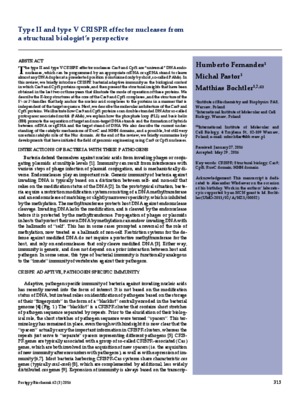 The type II and type V CRISPR effector nucleases Cas9 and Cpf1 are “universal” DNA endonucleases, which can be programmed by an appropriate crRNA or sgRNA strand to cleave almost any DNA duplex at a preselected position (constrained only by short, so-called PAMs). In this review, we briefly introduce CRISPR bacterial adaptive immunity as the biological context in which Cas9 and Cpf1 proteins operate, and then present the structural insights that have been obtained in the last two or three years that illustrate the mode of operation of these proteins. We describe the R-loop structures at the core of the Cas9 and Cpf1 complexes, and the structure of the 5’- or 3’-handles that help anchor the nucleic acid complexes to the proteins in a manner that is independent of the target sequence. Next, we describe the molecular architecture of the Cas9 and Cpf1 proteins. We illustrate how Cas9 and Cpf1 proteins scan double stranded DNA for so-called protospacer associated motifs (PAMs), we explain how the phosphate loop (PLL) and basic helix (BH) promote the separation of target and non-target DNA strands and the formation of hybrids between crRNA or sgRNA and the target strand of DNA. We also describe the current understanding of the catalytic mechanisms of RuvC and HNH domains, and a possible, but still very uncertain catalytic role of the Nuc domain. At the end of the review, we briefly summarize key developments that have initiated the field of genomic engineering using Cas9 or Cpf1 nucleases