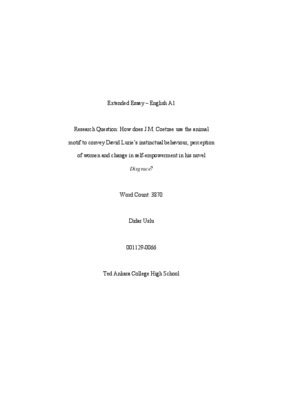 How does J.M. Coetzee use the animal motif to convey David Lurie’s instinctual behaviour, perception of women and change in self-empowerment in his novel Disgrace?

Disgrace deals with the transition of a fifty-two year old English professor, David Lurie, in terms of perception as he adapts to the new social order in post-apartheid South Africa. With the change in David’s social position as a white man in post-apartheid era, his self-empowerment and perception transforms. The transformation can be seen in the development of his relationship with animals who are seen to be a neglectable part of the society from David’s former point of view. He accepts the shift of power and acknowledges his inner conflicts, as he starts to approach dogs with a friendly manner. The transition also affects his perception of others and helps him develop empathy. Raised in a patriarchal system, David perceives women as sexual objects but his apathy starts to fade away as he is condemned for abusing his student and losing his charm with aging. Coetzee also includes animals to reflect the change in David’s perception of women. From this amplification, David’s understanding of animals reflects his approach towards women since they show similarity. David’s impulsive behavior towards women and the inner conflicts that arise from the denunciation for those behaviors are emphasized with imageries that involve animals. The animal metaphors in the description of characters, David’s relationship with dogs and his approach to other animals point out to their significance in the novel