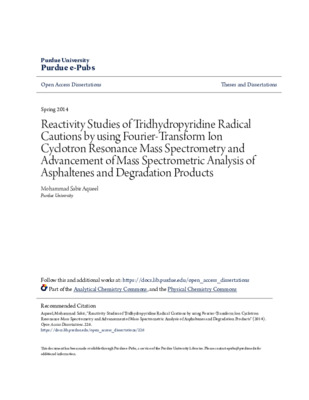 Aromatic organic molecules which have unpaired electrons play an important role in a variety of applications in the fields of organic synthesis, organic magnets, and biological activity of organic compounds. Several studies have been published on σ- type carbon-centered mono- and biradicals. Reactive intermediates with three formally unpaired electrons are known as triradicals. They can be defined as species with three electrons distributed in three degenerate or nearly degenerate orbitals, based on Salem\u27s definition of biradicals from the electronic structure point of view. Very little is known about the reactivity of carbon-centered σ,σ,σ- triradicals due to the complexity of studying triradicals experimentally. Fourier-transform ion cyclotron resonance mass spectrometry (FT-ICR) and distonic ion approach were employed to characterize the reactivity of three isomeric σ,σ,σ-triradicals. The reactivity of the triradicals was compared with previously studied related mono- and biradicals. Examination of the reactivity of σ,σ,σ-triradicals not only provides information about the chemical properties of triradicals but also helps us understand better the influence of spin/spin interactions within polyradicals. ^ In addition to fundamental studies, as described above, mass spectrometry can be helpful in structural elucidation of components of complex mixtures. This dissertation reports the utility of atmospheric pressure chemical ionization(APCI) tandem mass spectrometry for the identification of compounds containing the 3-phenylallyl alcohol moiety in lignin degradation product mixtures. This method was needed because most lignin degradation products with these structural features undergo fragmentation when they are ionized in mass spectrometers by using common methods. The specific goal was to develop a mass spectrometric evaporization/ionization method that produces only one ion type per analyte without fragmentation that can be used to derive MW information The results demonstrate that when sample solutions of lignin model compounds containing the 3-phenylallyl alcohol moiety are dissolved in water and doped with PdCl 2, atmospheric pressure chemical ionization (APCI)yields abundant (M-H) + ions. The specificity of the method was explored by analyzing various other model compounds which do not contain the 3-phenylallyl alcohol moiety. The model compounds that contained unsaturation in the side chain but no 3-phenylallyl alcohol moiety generated ions such as (M-H+H2O) + and (M-H+CH3OH)+ upon APCI after treating the sample with PdCl2. Finally, the method was used to explore the presence of 3-phenylallyl alcohol moiety containing compounds in real degraded lignin samples. The mass spectra collected before and after treatment of the degraded lignin sample with PdCl2 indicated the absence of compounds with the 3-phenylallyl alcohol moiety. In order to confirm this conclusion, the degraded lignin samples were doped with known amounts of model compounds containing the 3-phenylallyl alcohol moiety and the mass spectra were measured before and after treating the sample with PdCl 2. The model compounds were easily identified by using this method. This method will greatly facilitate the characterization of mixtures derived from biomass. ^ In addition to identification of compounds containing 3-phenylallyl alcohol moiety in complex lignin mixtures, APCI tandem mass spectrometry was also used to study the fragmentation behavior of ionized synthetic model compound of asphaltenes. The CAD studies of ionized molecules with fused aromatic ring systems, such as 9-dodecylanthracene, dodecylpyrene, 9-hexylnaphthalene and hexylpyrene, show exclusively benzylic bond cleavages. However, the alkyl side chains of ionized hexylnaphthalene, dodecylnaphthalene, hexylbenzene and dodecylbenzene react with the aromatic π-system to produce odd-electron fragment ions from odd-electron ions. Asphaltene model compounds show less benzylic bond cleavages. This suggests that the ring size of the fused aromatic ring system plays an important role in controlling these fragmentations