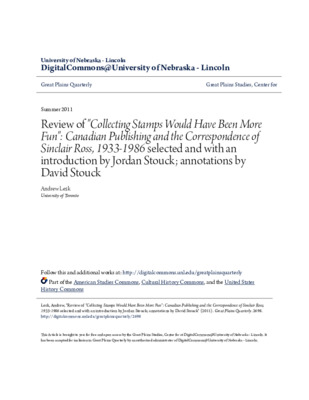 Review of \u3ci\u3e Collecting Stamps Would Have Been More Fun : Canadian Publishing and the Correspondence of Sinclair Ross, 1933-1986\u3c/i\u3e selected and with an introduction by Jordan Stouck; annotations by David Stouck

A book not just for completists, the Stoucks\u27 effort succeeds in illuminating the publishing record of one of Canada\u27s most secretive authors. For those who have not read much criticism on Ross, this book will aid in understanding one very representative mid-twentieth-century Canadian author\u27s publishing and artistic struggles. Most striking is Jordan Stouck\u27s note-perfect introduction, one that is academically rigorous yet free of jargon and platitudes. Stouck begins at, well, the beginning, in noting that Ross\u27s As For Me and My House is an originary text in western Canadian literature, although Ross himself perceived his literary career as a failure. From a publishing perspective this is true; from a literary standpoint, not exactly. Ross\u27s first novel became a best-seller, but only after it was given a boost by publishers eager to start a Canadian canon (and to profit from that), about seventeen years after its initial publication