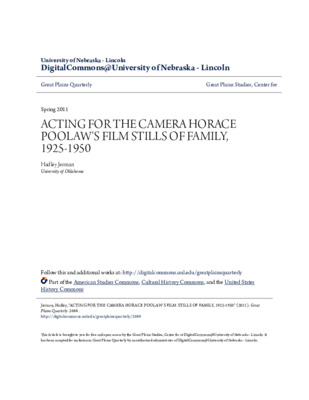 During the late 1920s, American technology historian Lewis Mumford drafted these words in a manuscript that would become Technics and Civilization. At the same time, Kiowa photographer Horace Poolaw began documenting daily life in southwestern Oklahoma with the very technology Mumford alleged altered the way humanity saw itself. As Poolaw began making dramatically posed, narrative-rich portraits of family members, Mumford asserted that the modern individual now viewed him or herself as a public character, being watched by others. He further suggested that humankind developed a camera-eye way of looking at the world and at oneself as if continuously on display.