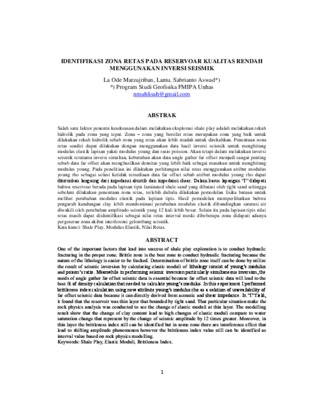 One of the important factors that lead into success of shale play exploration is to conduct hydraulic fracturing in the proper zone. Brittle zone is the best zone to conduct hydraulic fracturing because the nature of the lithology is easier to be fracked. Determination of brittle zone itself can be done by utilize the result of seismic inversion by calculating elastic moduli of lithology consist of young???s modulus and poison???s ratio. Meanwhile in performing seismic inversion particularly simultaneous inversion, the needs of angle gather far offset seismic data is essential because far offset seismic data will lead to the best fit of density calculation that needed to calculate young???s modulus. In this experiment I performed brittleness index calculation using new attribute young???s modulus rho as a solution of unavailability of far offset seismic data because it can directly derived from acoustic and shear impedance. In ???I??? field, it found that the reservoir was thin layer that bounded by tight sand. That particular situation make the rock physics analysis was conducted to see the change of elastic moduli at thin layer. The modelling result show that the change of clay content lead to high changes of elastic moduli compare to water saturation change that represent by the change of seismic amplitude by 12 times greater. Moreover, in thin layer the brittleness index still can be identified but in some zone there are interference effect that lead to shifting amplitude phenomenon however the brittleness index value still can be identified as interval value based on rock physics modelling