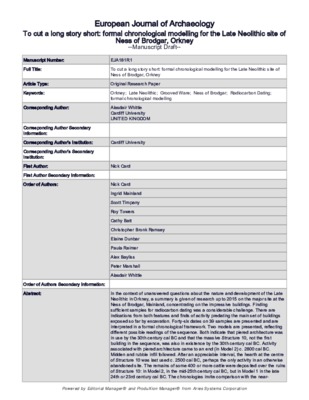 To cut a long story short: formal chronological modelling for the Late Neolithic site of Ness of Brodgar, Orkney

In the context of unanswered questions about the nature and development of the Late Neolithic in Orkney, a summary is given of research up to 2015 on the major site at the Ness of Brodgar, Mainland, concentrating on the impressive buildings. Finding sufficient samples for radiocarbon dating was a considerable challenge. There are indications from both features and finds of activity predating the main set of buildings exposed so far by excavation. Forty-six dates on 39 samples are presented and are interpreted in a formal chronological framework. Two models are presented, reflecting different possible readings of the sequence. Both indicate that piered architecture was in use by the 30th century cal BC and that the massive Structure 10, not the first building in the sequence, was also in existence by the 30th century cal BC. Activity associated with piered architecture came to an end (in Model 2) c. 2800 cal BC. Midden and rubble infill followed. After an appreciable interval, the hearth at the centre of Structure 10 was last used c. 2500 cal BC, perhaps the only activity in an otherwise abandoned site. The remains of some 400 or more cattle were deposited over the ruins of Structure 10: in Model 2, in the mid- 25th century cal BC, but in Model 1 in the late 24th or 23rd century cal BC. The chronologies invite comparison with the near-neighbour of Barnhouse, in use from the later 32nd to the earlier 29th century cal BC, and the Stones of Stenness, probably constructed by the 30th century cal BC. The Ness, including Structure 10, appears to have outlasted Barnhouse, but probably did not endure in its primary form for as long as previously envisaged. The decay and decommissioning of the Ness might coincide with the further development of the sacred landscape around it; but precise chronologies for other sites in the surrounding landscape are urgently required. Spectacular feasting remains deposited above Structure 10 may belong to a radically changing world, coinciding (in Model 2) with the appearance of Beakers nationally, but it was arguably the by now mythic status of that building which drew people back to it.REF Compliant by Deposit in Stirling's Repositor