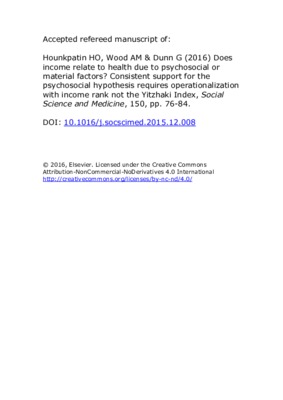 Does income relate to health due to psychosocial or material factors? Consistent support for the psychosocial hypothesis requires operationalization with income rank not the Yitzhaki Index

Research on why income influences health has produced mixed findings. Many, but not all, studies suggest that the relationship between income and health is due to income indicating psychosocial position rather than the associated material benefits. The inconsistent findings may be partly due to the use of the Yitzhaki Index, a function which calculates the accumulated income shortfall for an individual relative to those with higher income, in order to represent the psychosocial position conferred by income. The current study tests whether an alternative specification - income rank - provides more consistent conclusions regarding the psychosocial effect of income on health. We used data from two nationally representative samples: 14,224 observations from 9,404 participants across three waves (2004, 2008, and 2012) of the English Longitudinal Study of Ageing (ELSA) and 29,237 observations from 8,441 individuals across seven waves (2007-2013) of the Longitudinal Internet Studies for the Social Sciences (LISS). Multilevel regression models indicated that income rank was a stronger and more consistent predictor than both the Yitzhaki Index and actual income of self-rated and objective health. The psychosocial hypothesis is more consistently supported when income rank is used to test it