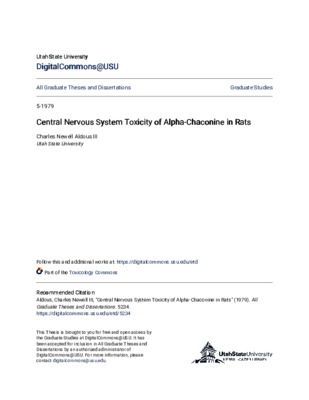 Effects of alpha-chaconine were examined in the central nervous system on the basis of electrophysiological tests and by assaying for changes in the levels of several known neurotransmitters of the brain. The possibility that brain acetylcholine levels might increase corresponding to acetylcholinesterase inhibition in treated rats was investigated where an increase would suggest that the anti-acetylcholinesterase activity of alpha-chaconine was physiologically significant. Various doses of alpha-chaconine were given to rats prepared for physiological tests. Some symptoms were observed at relatively low doses (8 to 10 milligrams per kilogram). These included constriction of abdominal muscles~ respiratory impairment~ and sedation. At the same dosage the electroencephalogram pattern was altered by a notable increase in the low-frequency component. Tachycardia was observed at both low (10 milligrams per kilogram) and at high doses (40 milligrams per kilogram)~ whereas intermediate doses (20 to 30 milligrams per kilogram) were associated with bradycardia. Although other physiological tests implicated the brain as the target organ, analyses of brain neurotransmitter chemicals failed to show significant trends. Compounds assayed were acetylcholine, norepinephrine, dopamine, serotonin, and the serotonin metabolite, 5-hydroxyindoleacetic acid. The observation that acetylcholine levels were unchanged after alpha-chaconine administration did not support the hypothesis that the major toxic effect of the test compound was caused by alterations in the levels of this neurotransmitter