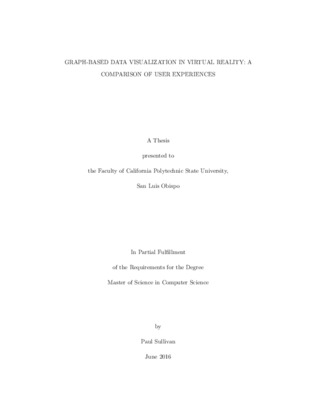 Virtual reality is currently in the spotlight, attracting intense scrutiny by the press, technology companies, and consumers. After twenty years of dormancy, the technology has experienced a renaissance following advancements in both hardware and software. Most of these developments, and thus press attention, have been centered on entertainment. However, if the technology is going to continue to grow, it must be useful in a wide variety of situations. This paper explores the effectiveness of visualizing data in virtual reality in comparison to traditional presentations. In this thesis, we present an approach to displaying data in a virtual reality environment. We drew upon various visualization and design principles in two dimensions (2D) and extended and implemented them in three dimensions (3D). Finally, we experimented with animations to highlight how the immersive qualities of virtual reality could help direct the user\u27s attention to important features. To verify our work, we tested users\u27 ability to understand worldwide economic data represented as graphs. We measured the speed and accuracy of each subject\u27s responses as they viewed the economic data in two environments: a virtual reality (VR) environment using the Oculus Rift to look at our 3D animated chart, and a more traditional environment with a series of 2D paper charts. We concluded that for newcomers to VR, 2D charts are faster and more accurate. However, 3D visualizations are more engaging and are superior when searching for certain kinds of information such as the highest and lowest values in a set