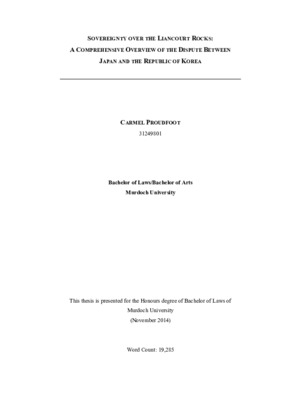 Sovereignty over the Liancourt Rocks: A comprehensive overview of the dispute between Japan and the Republic of Korea

The Liancourt Rocks dispute is one of a series of ongoing island disputes in East Asia. The dispute centres on two tiny rocks in the Sea of Japan that have been disputed between Japan and South Korea for centuries. Despite its long history, the dispute has not received much Western attention and has never been resolved. This paper considers several aspects of the issue including the law of sovereignty and its application to this problem, the ability of North Korea to claim the Rocks as a successor of the Kingdom of Korea, the potential for the Rocks to generate extended maritime zones under the law of the sea and the possibility of using a condominium to share the resources of the region. In doing so, this paper seeks to provide a comprehensive overview of the dispute and provide practical proposals for its resolution. This paper seeks to answer the question of how this dispute would be resolved at law. It is argued that South Korea would prevail over both Japan and North Korea, but that this would not generate the extended maritime zones envisaged by the parties. However, even utilising unconventional solutions like condominiums would not resolve the underlying problem which is ultimately a matter of national pride