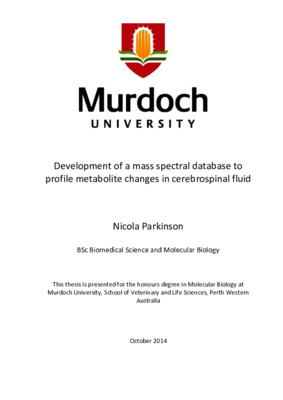 Alzheimer’s disease is an incurable chronic neurodegenerative disease that results in severe memory loss and cognitive function. It is the third most common cause of death and the most common cause of dementia in the developed world. To date, a number of possible causes have been identified, however the primary cause is still unknown. Diagnosis generally does not occur until the later stages, resulting in insufficient treatment to reverse any damage. Metabolomic analysis is a relatively new technique that aims to identify all metabolites present in a biological sample, which could potentially serve as biomarkers. Biomarkers can be used as a diagnostic tool and, more importantly, allow identification of the pathways involved in the pathological process. In current Alzheimer’s disease research, the identification of cerebrospinal fluid (CSF) biomarkers is a topic of considerable interest. Attaining CSF is a highly invasive process and for this reason is in limited supply, therefore it is important that as much information is attained from initial analysis. In this study an MS/MS method for metabolites, which have so far been identified in CSF, was developed for the Bruker SCION triple quadrupole GC-MS, with the aim of profiling unknown samples from initial analysis. A total of 90 features (81 compounds) were constructed into this method, consisting of their retention times and optimal precursor-product ion pairs. A combination of these properties should be unique to each compound, providing confidence in identification. Constructing this MS/MS method was completed by conducting a series of analyses. Full scan analysis established retention times, and identified the most abundant ions for each compound. These ions were analysed using a SIM/scan analysis, which identified possible precursor ions. Following this, a product ion scan analysis was achieved to identify the product ions generated from dissociation of the precursor ions. Finally, the precursor-product ion pairs were established and analysed using a multiple reaction monitoring scan analysis. This MS/MS method was generated from reference standards, and therefore the data generated from unknown samples can be confirmed with relatively high confidence. This should allow identification of the metabolites which are involved in the disease process, ultimately resulting in the development of a treatment to reverse or slow this chronic degeneration

Year: 2014
OAI identifier: oai:researchrepository.murdoch.edu.au:25402
Provided by: Research Repository
Download PDF:
Sorry, we are unable to provide the full text but you may find it at the following location(s):