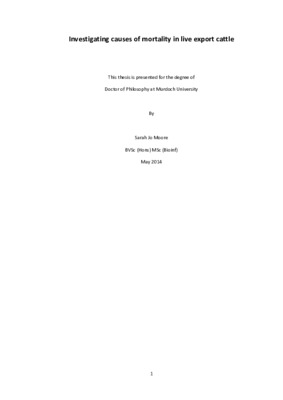 This research project was initiated to provide industry with current, credible, scientific data on causes of death and risk factors for mortality in Australian live export cattle on long-haul voyages. Animal data and necropsy samples were collected from animals that died on 20 research voyages during the study period March 2010 to September 2012. The average voyage mortality percentage was 0.37%. Respiratory disease was the most commonly diagnosed cause of death, accounting for 107/215 (49.8%) of deaths overall, and 107/181 (59.1%) of deaths for which a diagnosis could be made. In addition, pneumonia was identified in 33% of animals for which respiratory disease was not considered the primary cause of death. Other common causes of death included lameness (n = 22/181, 12.2%), ketosis (n = 12, 6.6%), septicemia (n = 11, 6.1%), and enteric disease (n = 10, 5.5%). Quantitative polymerase chain reaction (qPCR) assays were developed to detect viruses and bacteria known to be associated with bovine respiratory disease (BRD) in necropsy and nasal swab samples: Bovine coronavirus (BCoV, Betacoronavirus 1), Bovine herpesvirus 1 (BoHV-1), Bovine viral diarrhoea virus (BVDV), Bovine respiratory syncytial virus (BRSV), Bovine parainfluenza virus 3 (BPIV-3), Histophilus somni, Mycoplasma bovis, Mannheimia haemolytica and Pasteurella multocida Two-thirds (130/195) of animals from which lung samples were collected had histological changes and/or positive qPCR results suggestive of infectious lung disease: 93/130 (72%) had evidence of primary bacterial infection, 4 (3%) with primary viral infection, 29 (22%) with concurrent bacterial and viral infections, and for 4 (3%) the causative organism could not be indentified. M. bovis, H. somni, P. multocida, M. haemolytica and BCoV were significantly associated with respiratory disease during voyages. Results from nasal swab and serological samples collected at entry to the pre-export assembly depot indicated that there were significant differences in nasal and seroprevalence between animals sourced from different properties. Combined nasal swab and serum results suggest that BCoV and BVDV are likely to be important infectious agents in the development of BRD in live export cattle while BPIV-3 is unlikely to play a major role. The contribution of BoHV-1, BRSV and bacteria of interest is difficult to determine. Analysis of animal and voyage data collected by industry between January 1995 and December 2012 revealed that while there has been an overall reduction in voyage mortality rates since 2000, there remain significant differences in mortality rate between load and discharge regions. Examination of daily mortality data available for research voyages revealed that peak daily mortality risk occurs at 3-4 weeks post-departure. The development of methods for spatial analyses coupled with data available in the National Livestock Identification System database allowed the description of patterns of animal movement prior to export. This study has improved our understanding of causes of death and risk factors for mortality in Australian live export cattle. We now have baseline data on the prevalence of BRD organisms in live export cattle that could be used to develop strategies for BRD prevention and control prior to loading and during voyages

Year: 2014
OAI identifier: oai:researchrepository.murdoch.edu.au:24046
Provided by: Research Repository
Download PDF:
Sorry, we are unable to provide the full text but you may find it at the following location(s):