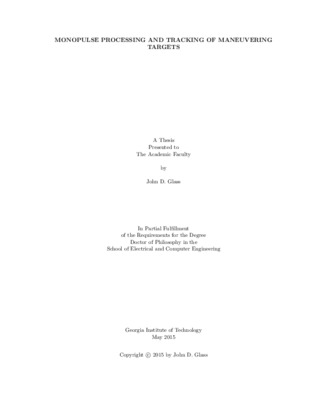 As part of the processing of tracking targets, surveillance radars detect the presence of targets and estimate their locations. This dissertation re-examines some of the often ignored practical considerations of radar tracking. With the advent of digital computers, modern radars now use sampled versions of received signals for processing. Sampling rates used in practice result in the bin-straddling phenomenon, which is often treated as an undesired loss in signal power. Here, a signal model that explicitly models the sampling process is used in the derivation of the average loglikelihood ratio test (ALLRT), and its detection performance is shown to defeat the bin-straddling losses seen in traditional radar detectors. In monopulse systems, data samples are taken from the sum and difference channels, by which a target direction-of-arrival (DOA) estimate can be formed. Using the same signal model, we derive new estimators for target range, strength, and DOA and show performance benefits over traditional monopulse techniques that are predominant in practice. Since tracking algorithms require an error variance report on target parameter estimates, we propose using the generalized Cramer-Rao lower bound (GCRLB), which is the CRLB evaluated at estimates rather than true values, as an error variance report. We demonstrate the statistical efficiency and variance consistency of the new estimators. With several parameter estimates collected over time, tracking algorithms are used to compute track state estimates and predict future locations. Using agile- beam surveillance radars with programmable energy waveforms, optimal scheduling of radar resources is a topic of interest. In this dissertation, we focus on the energy management considerations of tracking highly maneuverable aircraft. A comparison between two competing interacting multiple model (IMM) filter configurations is made, and a recently proposed unbiased mixing procedure is extended to the case of three modes. Finally, we introduce the radar management operating curve (RMOC), which shows the fundamental tradeoff in radar time and energy, to aid radar designers in the selection of an overall operating signal-to-noise level.Ph.D