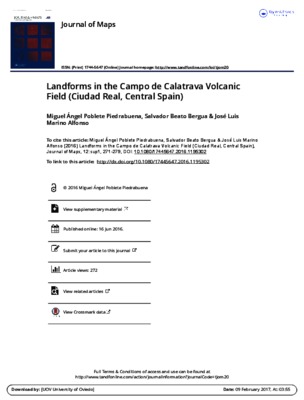 A detailed geomorphological map of the Campo de Calatrava Volcanic Field (CCVF) is presented at a scale of 1:50,000. The Campo de Calatrava, located on the south-eastern edge of the Hercynian Massif, is one of the most unusual volcanic areas of the Iberian Peninsula. The volcanic activity develops chronologically from Upper Miocene to Holocene, with a wide range of styles and eruptive dynamics that have created a variety of forms and types of volcanoes, the abundance of maars being outstanding. Thus, this map represents both the landforms of volcanic origin and the interferences that volcanic activity has caused in other processes and forms, offering the reader the key to understanding the origin and fundamental features of the landscape of the territory. Also shown is the crucial role geomorphological mapping can play as a basic tool in the conservation of natural heritage and in territorial planning. The mapping system applied is the French CNRS RCP 77, although various local adaptations have been incorporated. The map legend consists of 80 elements arranged in 10 sections, in which a wide variety of morphostructures, forms and deposits produced under varios types of both relict and active morphogenetic systems are identified