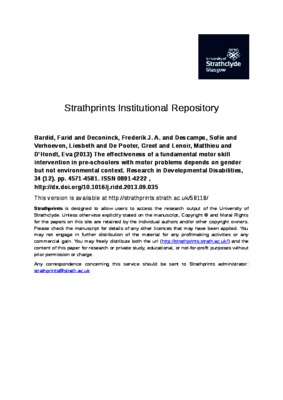 This study evaluated the effect of a 10-week fundamental motor skill programme in pre-schoolers with motor problems. Alongside the general effect of the intervention, we also explored possible gender differences and the role of the environmental context (living community, socio-economic status, and recreational space inside/outside the house). The intervention group (n=47; 20 ♂ and 27 ♀) received twenty 60-min motor skill sessions (2 per week) in addition to the regular physical education curriculum for pre-schoolers; the control group (n=46; 21 ♂ and 25 ♀) did not receive additional practice. General motor competence, and locomotor and object control subscales, were assessed before and after the intervention using the Test of Gross Motor Development 2nd edition (TGMD-2). Data regarding environmental factors were gathered through a questionnaire. A Group×Gender×Time ANOVA revealed that the intervention group benefited significantly from the intervention and scored better than the control group at the post-test for general motor competence and both sub-categories (locomotor and object control skill). Moreover, the intervention programme was found to be effective in helping 49% of the intervention group to achieve an average motor skill level, according to the TGMD-2 norms, while a further decline in motor competence was observed in the control group. Interestingly, the effect appeared to be gender-specific, since object control skill improved only in girls of the intervention group. Considering the environmental context, none of the above-mentioned factors was found to have an influence on the effectiveness of the intervention. The present study highlights the need for an early motor skill programme with a gender-specific approach in order to help low skilled boys and girls master a diverse set of motor skills