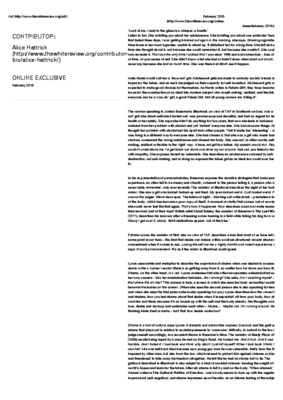 VEIL will feature two new works, Veil (2015) and Blackout (2016); both produced in part, as a result of a research residency in early 2014 at the Bemis Center for Contemporary Art, Omaha, Nebraska. Veil is a psycho-sexual film about sex, religion, guilt, ecstasy, free-will, cinematic pornography and love. We hear Dr. Patricia Lyons describes her relationship with masturbation, organized religion and the presence of the cinematic. We watch an abstract, evolving and fluid set of images pass before us: in scarlet red. Veil is a poetic, experimental expression/exploration of sexual identity clashing with religious doctrine. Blackout is a film about time, and the loss of time as experienced by a recently sober, 22 year-old woman. The narrator of the film discusses her history of experiencing black outs through drinking; covering a five year time period that culminated in a three-day time-loss, her last bender. Visually, the work stutters through black moments, punctuated by originally recorded, heavily-edited abstract and representational images. The combination of materials creates a visual upheaval that echoes the content of the narrative. These works adopt some of the methodologies (specifically the recorded interview) used by journalists, oral historians, anthropologists, criminologists and other social scientists and academics, and combines that approach with the literary device of creative non-fiction. The conceptual core of all of this new work is contained within voices, edited to operate as if the narrator is speaking directly to the audience. The timbre, pace, pauses and vocabulary of the narratives are constructed to emphasize and relate these personal accounts. The sources of these narratives are the result of hours of interviews that have been heavily edited, restructured and reduced to the length of a matter of minutes. The recorded interviews are edited, transcribed into text, and then re-edited textually to form a script. The final audio edit, follows the transcribed text-based script, creating narrative through a reversal of the conventional script-writing process. The constructed narratives within the artworks are positioned from the perspective of lived experience: anecdotal first person narratives, academic expertise and speculative opinion are represented within the films/ artworks and given equal weight in order to ask questions about the conditions and structures of both our religious and secular belief systems: our philosophical, social, political and academic foundations. Veil was shown in the Aesthetica Film festival in York in 2015 and as part of the film program at the Edinburgh Festival in 2016. Blackout has been shown in Aesthetica Film festival in York, Cork International Film Festival, Melbourne Underground Film Festival, New Orleans International Film Festival and the Oregon Independent Film Festival where it won Best Experimental Short Film, in 2016. In 2017, Blackout has been selected for the London Short Film Festival