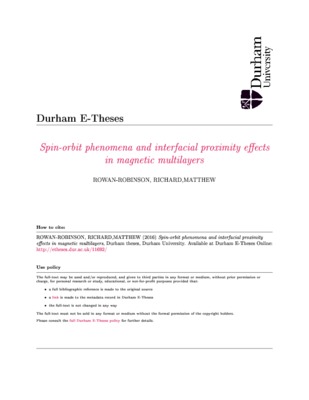 This thesis examines phenomena originating from the spin-orbit interaction in the context of interfacial effects. Four effects were studied, the anisotropic magnetoresistance, spin-orbit torques, magnetic damping and the Dzyaloshinskii-Moriya interaction. The anisotropic magnetoresistance (AMR) was studied in Ni, Ni95V5 and Ni95Cr5 thin films. The absolute resistivity change due to AMR reduced with decreasing film thickness. This was explained in terms of enhanced electron-magnon spin-flip scattering in the presence of reduced dimensionality. It was shown that the Campbell, Fert and Jaoul model could be extended to include this generalised thickness dependence. Spin-orbit torques were investigated in multilayer structures with different magnetic anisotropies. Current-induced magnetisation reversal, due to the spin-Hall efect of Pt, was observed in a symmetric Pt/Co/Pt sample with weak perpendicular magnetic anisotropy. No evidence for the Rashba effect was found in this symmetric structure. A spin Hall angle of (0.13 +- 0:06) was extracted for Pt. Using x-ray resonant magnetic reflectivity, the interfacial proximity induced magnetism (PIM) in Pt was investigated in Pt/Co/Pt multilayer structures with in-plane magnetic anisotropy and characterised as a function of Au and Ir spacer layers at the Co/Pt interface. The PIM was shown to depend strongly on interface morphology and decayed rapidly with increasing spacer layer thickness. The magnetic damping and Dzyaloshinkskii-Moriya interaction (DMI) were measured in the same samples to investigate the contribution of the PIM to these effects. It was shown that the magnetic damping was dominated by the d-d hybridisation at the Co/Pt interface which reduced as spacer layers of increasing thickness were inserted. It was not clear whether the loss of PIM plays a substantial role in this. The DMI was shown to increase as Au and Ir spacer layers were added, due to the prevention of cancellation of opposite DMI contributions from the Pt interfaces. This rise in DMI was on a different lengthscale than was found for the loss of PIM. The results suggested no correlation between the PIM and DMI