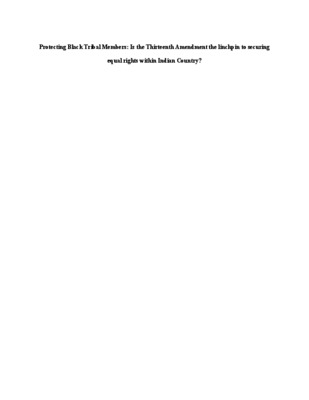 Currently, two of those tribes are caught in an ongoing struggle between their “full blood” members and their members of African descent. The Seminole and Cherokee tribes have taken several measures to remove their Freedmen from the tribes thus denying them access to federally funded programs, monies, and the right to vote in tribal elections. The Freedmen filed suit to contest this discrimination, but courts have continually dismissed the suits because of tribal sovereignty. In some cases, the Freedmen sued the federal government for allowing the tribes to disenfranchise them. However, the courts dismissed the suits because tribes are indispensable parties that cannot be joined because they are sovereign entities. This Comment discusses whether the Thirteenth Amendment’s bar against the “badges and incidents of slavery” abrogates tribal sovereignty so that the Freedmen can sue a tribe in federal court. Part I tribal sovereignty and the important role it serves as a protection against encroaching state laws. Part II discusses two cases studies highlighting the current disenfranchisement of the Freedmen and the current legal battles involving the United State government and the Cherokee and Seminole Nations. Part III briefly discusses the courts opposition to applying civil rights legislation within the tribes to protect tribal members due to tribal sovereignty. Due to the difficulty of suing the government to protect the Freedmen and the courts opposition to allowing suits with civil rights legislation Part IV will recommend that the Thirteenth Amendment as a possible means to abrogate tribal sovereignty to protect the Freedmen.. After briefly analyzing the how courts have limited and expanded the scope of the Thirteenth Amendment’s bar against the “badges and incidents of slavery” with regard to sovereign entities including Native American tribes, Part IV will demonstrate how the Freedmen can use the Thirteenth Amendment as a limited waiver of tribal sovereignty because the current disenfranchisement constitutes a “badge or incident of slavery.” Part IV will also argue that the expansion of the Thirteenth Amendment’s ban against the “badges and incidents of slavery” to reach the tribes, will not dilute tribal sovereignty because courts can distinguish the Freedmen’s claim from prior case law, thus narrowly tailoring an exception to allow for their claim