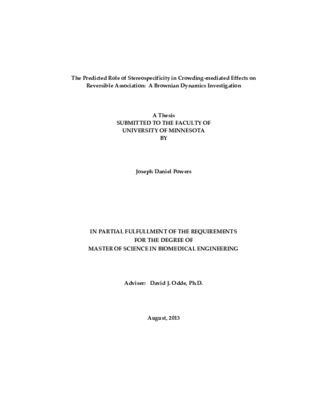 The predicted role of stereospecificity in crowding-mediated effects on reversible association: a Brownian Dynamics investigation

University of Minnesota Master of Science thesis. August 2013. Major: Biomedical Engineering. Advisor: David J. Odde, Ph.D. 1 computer file (PDF); vi, 70 pages, appendix p. 63-70.Macromolecular crowding refers to the presence of inert molecules in close proximity to other reacting molecules, and is often discussed in the context of biochemical reactions in the cytoplasm. This phenomenon has been proposed to cause alterations in the intrinsic kinetics and thermodynamics of chemical reactions, which has led to certain undefined caveats when relating biochemical characteristics observed in vitro to those seen in vivo. In this work, the effects of macromolecular crowding were studied by means of a computational, Monte Carlo simulation using Brownian Dynamics, where generalized chemical association and dissociation reaction kinetics of varying degrees of stereospecificity were modeled both in the absence and presence of crowding molecules of different sizes. It was found that crowded environments impose energetic contributions to reactant pairs through depletion forces, which bias their translational and rotational diffusion in such a way that overall net assembly is favored, with stronger effects on reactants with higher degrees of stereospecificity than for those with low stereospecificity. These favorable forces are insufficient to overcome the slowing of translational diffusion by crowders for low stereospecificity reactions, but more than compensate for the translational slowing for high stereospecificity reactions. In general, the effects observed in the simulation are relatively modest, with kon decreasing by 2-fold for low stereospecificity reactions, and increasing by 3-fold for high stereospecificity reactions. In addition, koff decreases by ~30-60% in the presence of crowders (depending on the strength of the bond between the reactant pair), so that the equilibrium constant is increased by at most ~3.5-fold (&Delta;&Delta;Go = -1.3kBT). The moderate effects of crowding predicted in this work through strictly geometric constraints suggest that any effects observed in vitro larger than those found here are due to other energetic effects, such as solvent reordering. More generally, the results suggest that reactions in the cytoplasm are fundamentally insensitive to the physical presence of crowders over a large range of volume fractions (0-0.3)