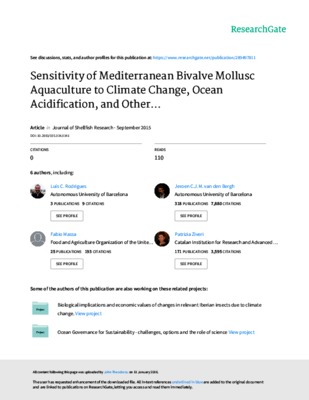 Sensitivity of Mediterranean bivalve mollusc aquaculture to climate change, ocean acidification, and other environmental pressures : findings from a producer survey

Human-induced climate change and ocean acidification are global environmental phenomena with a common driver: anthropogenic emissions of carbon dioxide. Both processes potentially threaten the Mediterranean bivalve mollusc aquaculture sector, which is economically relevant to several regions and countries. Detrimental effects on bivalve mollusc species might arise from the associated increase in sea surface temperature, pH reduction, higher frequency of extreme climatic events, and possible synergies with other nonclimatic stressors, such as harmful algal blooms and mollusc diseases. This paper presents the results of a questionnaire-based study of Mediterranean bivalve mollusc producers from 12 coastal regions and six countries, the latter including those with the highest production share in the Mediterranean region. This study aims to assess knowledge and perception of threat of climatic and nonclimatic environmental stressors within the Mediterranean aquaculture industry. Furthermore, it collects information about the (geographical) impacts of summer heat waves and ocean acidification. The results suggest that ocean acidification is still a relatively unknown phenomenon and generally poorly understood. Moreover, it is considered a secondary threat compared with other pressures. Summer heat waves are presently perceived as the highest threat, having been observed in a majority of the studied production sites in past years, with effects on seed (spat), adult mortality, and byssus attachment