Multiple insecticide resistance in an infected population of the malaria vector Anopheles funestus in Benin.

BACKGROUND Knowledge on the spread and distribution of insecticide resistance in major malaria vectors such as Anopheles funestus is key to implement successful resistance management strategies across Africa. Here, by assessing the susceptibility status of an inland population of An. funestus Giles (Kpome) and investigating molecular basis of resistance, we show that multiple resistance and consistent plasmodium infection rate are present in Anopheles funestus populations from Kpome. METHODS The insecticide susceptibility level of collected Anopheles funestus was assessed. Synergist (PBO) was used to screen resistance mechanisms. The TaqMan technique was used for genotyping of insecticide resistant alleles and detecting plasmodium infection levels. The nested PCR was used to further assess the plasmodium infection rate. RESULTS The TaqMan analysis of plasmodial infections revealed an infection rate (18.2 %) of An. funestus in this locality. The WHO bioassays revealed a multiple phenotypic resistance profile for An. funestus in Kpome. This population is highly resistant to pyrethroids (permethrin and deltamethrin), organochlorines (DDT), and carbamates (bendiocarb). A reduced susceptibility was observed with dieldrin. Mortalities did not vary after pre-exposure to PBO for DDT indicating that cytochrome P450s play little role in DDT resistance in Kpome. In contrast, we noticed, a significant increase in mortalities when PBO was combined to permethrin suggesting the direct involvement of P450s in pyrethroid resistance. A high frequency of the L119F-GSTe2 DDT resistance marker was observed in the wild DDT resistant population (9 %RS and 91 %RR) whereas the A296S mutation was detected at a low frequency (1 %RS and 99 %SS). CONCLUSION The presence of multiple resistance in An. funestus populations in the inland locality of Kpome is established in this study as recently documented in the costal locality of Pahou. Data from both localities suggest that resistance could be widespread in Benin and this highlights the need for further studies to assess the geographical distribution of insecticide resistance across Benin and neighboring countries as well as a more comprehensive analysis of the resistance mechanisms involved 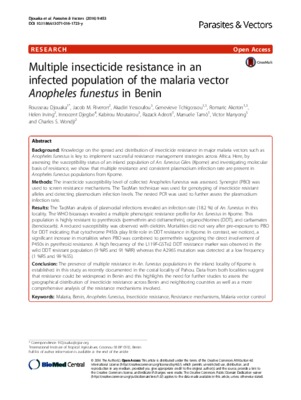 This paper was published in LSTM Online Archive.