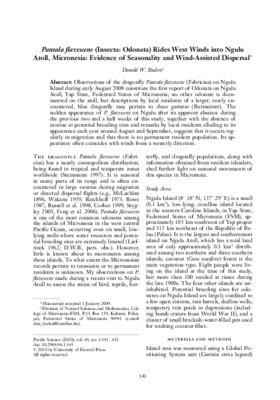 v. ill. 23 cm.QuarterlyObservations of the dragonfly Pantala flavescens (Fabricius) on Ngulu Island during early August 2008 constitute the first report of Odonata on Ngulu Atoll, Yap State, Federated States of Micronesia; no other odonate is documented on the atoll, but descriptions by local residents of a larger, rarely encountered, blue dragonfly may pertain to Anax guttatus (Burmeister). The sudden appearance of P. flavescens on Ngulu after its apparent absence during the previous two and a half weeks of this study, together with the absence of exuviae at potential breeding sites and remarks by local residents alluding to its appearance each year around August and September, suggests that it occurs regularly in migration and that there is no permanent resident population. Its appearance often coincides with winds from a westerly direction