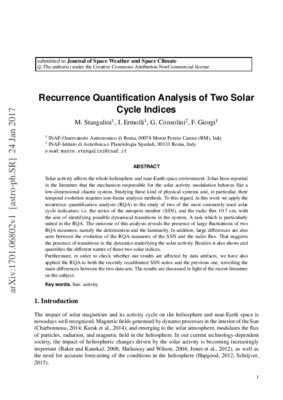 Solar activity affects the whole heliosphere and near-Earth space environment. It has been reported in the literature that the mechanism responsible for the solar activity modulation behaves like a low-dimensional chaotic system. Studying these kind of physical systems and, in particular, their temporal evolution requires non-linear analysis methods. To this regard, in this work we apply the recurrence quantification analysis (RQA) to the study of two of the most commonly used solar cycle indicators; i.e. the series of the sunspots number (SSN), and the radio flux 10.7 cm, with the aim of identifying possible dynamical transitions in the system. A task which is particularly suited to the RQA. The outcome of this analysis reveals the presence of large fluctuations of two RQA measures; namely the determinism and the laminarity. In addition, large differences are also seen between the evolution of the RQA measures of the SSN and the radio flux. That suggests the presence of transitions in the dynamics underlying the solar activity. Besides it also shows and quantifies the different nature of these two solar indices. Furthermore, in order to check whether our results are affected by data artifacts, we have also applied the RQA to both the recently recalibrated SSN series and the previous one, unveiling the main differences between the two data sets. The results are discussed in light of the recent literature on the subject.Comment: 23 pages, accepted for publication in the Journal of Space Weather and Space Climate (SWSC