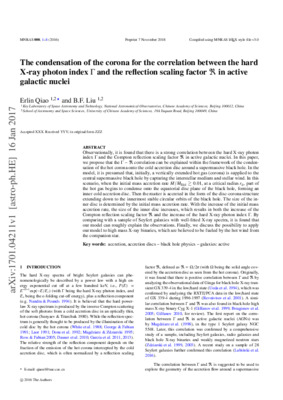 Observationally, it is found that there is a strong correlation between the hard X-ray photon index $\Gamma$ and the Compton reflection scaling factor $\Re$ in active galactic nuclei. In this paper, we propose that the $\Gamma-\Re$ correlation can be explained within the framework of the condensation of the hot corona onto the cold accretion disc around a supermassive black hole. In the model, it is presumed that, initially, a vertically extended hot gas (corona) is supplied to the central supermassive black hole by capturing the interstellar medium and stellar wind. In this scenario, when the initial mass accretion rate $\dot M/ \dot M_{\rm Edd} \gtrsim 0.01$, at a critical radius $r_{\rm d}$, part of the hot gas begins to condense onto the equatorial disc plane of the black hole, forming an inner cold accretion disc. Then the matter is accreted in the form of the disc-corona structure extending down to the innermost stable circular orbits of the black hole. The size of the inner disc is determined by the initial mass accretion rate. With the increase of the initial mass accretion rate, the size of the inner disc increases, which results in both the increase of the Compton reflection scaling factor $\Re$ and the increase of the hard X-ray photon index $\Gamma$. By comparing with a sample of Seyfert galaxies with well-fitted X-ray spectra, it is found that our model can roughly explain the observations. Finally, we discuss the possibility to apply our model to high mass X-ray binaries, which are believed to be fueled by the hot wind from the companion star.Comment: Accepted for publication by MNRAS, 8 pages, 7 figure