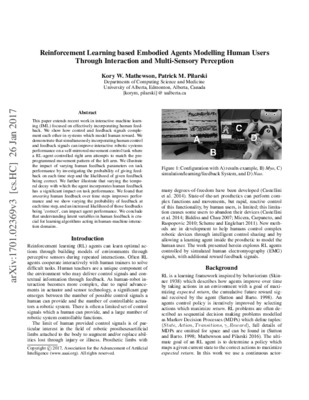 This paper extends recent work in interactive machine learning (IML) focused on effectively incorporating human feedback. We show how control and feedback signals complement each other in systems which model human reward. We demonstrate that simultaneously incorporating human control and feedback signals can improve interactive robotic systems' performance on a self-mirrored movement control task where an RL-agent controlled right arm attempts to match the preprogrammed movement pattern of the left arm. We illustrate the impact of varying human feedback parameters on task performance by investigating the probability of giving feedback on each time step and the likelihood of given feedback being correct. We further illustrate that varying the temporal decay with which the agent incorporates human feedback has a significant impact on task performance. We found that smearing human feedback over time steps improves performance and we show varying the probability of feedback at each time step, and an increased likelihood of those feedbacks being 'correct' can impact agent performance. We conclude that understanding latent variables in human feedback is crucial for learning algorithms acting in human-machine interaction domains.Comment: 4 pages, 2 figures, Accepted at the 2017 AAAI Spring Symposium on Interactive Multi-Sensory Object Perception for Embodied Agent