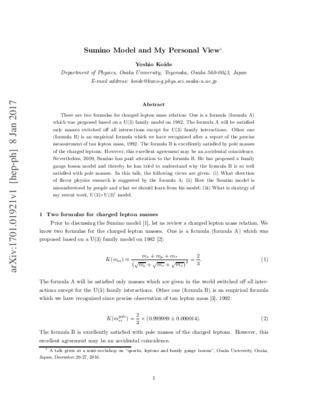 Sumino Model and My Personal View

There are two formulas for charged lepton mass relation: One is a formula (formula A) which was proposed based on a U(3) family model on 1982. The formula A will be satisfied only masses switched off all interactions except for U(3) family interactions. Other one (formula B) is an empirical formula which we have recognized after a report of the precise measurement of tau lepton mass, 1992. The formula B is excellently satisfied by pole masses of the charged leptons. However, this excellent agreement may be an accidental coincidence. Nevertheless, 2009, Sumino has paid attention to the formula B. He has proposed a family gauge boson model and thereby he has tried to understand why the formula B is so well satisfied with pole masses. In this talk, the following views are given: (i) What direction of flavor physics research is suggested by the formula A; (ii) How the Sumino model is misunderstood by people and what we should learn from his model; (iii) What is strategy of my recent work, U(3)$\times$U(3)$'$ model.Comment: 5 pages, Talk given at a mini-workshop on "quarks, leptons and family gauge bosons", Osaka, Japan, December 26-27, 201