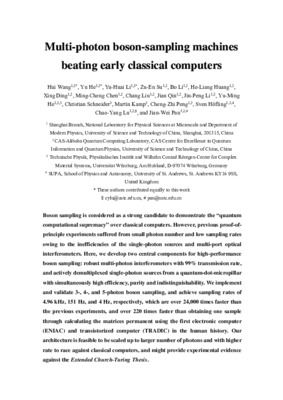 Boson sampling is considered as a strong candidate to demonstrate the quantum computational supremacy over classical computers. However, previous proof-of-principle experiments suffered from small photon number and low sampling rates owing to the inefficiencies of the single-photon sources and multi-port optical interferometers. Here, we develop two central components for high-performance boson sampling: robust multi-photon interferometers with 0.99 transmission rate, and actively demultiplexed single-photon sources from a quantum-dot-micropillar with simultaneously high efficiency, purity and indistinguishability. We implement and validate 3-, 4-, and 5-photon boson sampling, and achieve sampling rates of 4.96 kHz, 151 Hz, and 4 Hz, respectively, which are over 24,000 times faster than the previous experiments, and over 220 times faster than obtaining one sample through calculating the matrices permanent using the first electronic computer (ENIAC) and transistorized computer (TRADIC) in the human history. Our architecture is feasible to be scaled up to larger number of photons and with higher rate to race against classical computers, and might provide experimental evidence against the Extended Church-Turing Thesis.Comment: Revised for clarity. More information added. This work kick-starts a race against classical computers using photonic machines. A different version will appear in Nature Photonic