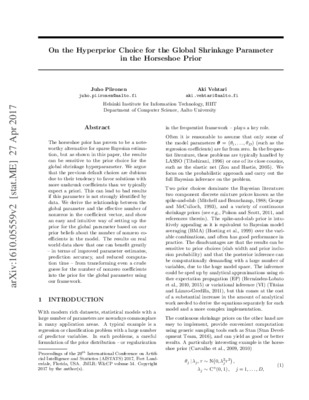 By Juho Piironen and Aki Vehtari
Get PDF (1 MB)

The horseshoe prior has proven to be a noteworthy alternative for sparse Bayesian estimation, but as shown in this paper, the results can be sensitive to the prior choice for the global shrinkage hyperparameter. We argue that the previous default choices are dubious due to their tendency to favor solutions with more unshrunk coefficients than we typically expect a priori. This can lead to bad results if this parameter is not strongly identified by data. We derive the relationship between the global parameter and the effective number of nonzeros in the coefficient vector, and show an easy and intuitive way of setting up the prior for the global parameter based on our prior beliefs about the number of nonzero coefficients in the model. The results on real world data show that one can benefit greatly -- in terms of improved parameter estimates, prediction accuracy, and reduced computation time -- from transforming even a crude guess for the number of nonzero coefficients into the prior for the global parameter using our framework.Comment: Appearing in AISTATS 2017, added one experiment to the supplementar