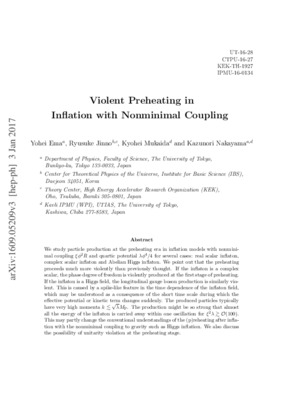 We study particle production at the preheating era in inflation models with nonminimal coupling $\xi \phi^2R$ and quartic potential $\lambda \phi^4/4$ for several cases: real scalar inflaton, complex scalar inflaton and Abelian Higgs inflaton. We point out that the preheating proceeds much more violently than previously thought. If the inflaton is a complex scalar, the phase degree of freedom is violently produced at the first stage of preheating. If the inflaton is a Higgs field, the longitudinal gauge boson production is similarly violent. This is caused by a spike-like feature in the time dependence of the inflaton field, which may be understood as a consequence of the short time scale during which the effective potential or kinetic term changes suddenly. The produced particles typically have very high momenta $k \lesssim \sqrt{\lambda}M_\text{P}$. The production might be so strong that almost all the energy of the inflaton is carried away within one oscillation for $\xi^2\lambda \gtrsim {\mathcal O}(100)$. This may partly change the conventional understandings of the (p)reheating after inflation with the nonminimal coupling to gravity such as Higgs inflation. We also discuss the possibility of unitarity violation at the preheating stage.Comment: 43 pages, 15 figure