Silvio Gesell (1862-1930) proposed a system of stamped money in order to accelerate monetary circulation and to free money from interest. This was part of a global socialist system intended to free economy from rent and interest. In the 1930s, Irving Fisher, who proposed the system to President Roosevelt, and John Maynard Keynes rendered homage to Gesell's monetary proposals in the context of the economic depression. Among the experiments that took place, several were based on his ideas, notably in the Austrian town of Wörgl and in the United States. These experiments were always local and never lasted more than a few months. This article shows that trust is the main issue of this kind of monetary organization; and therefore, that such experiments can only take place successfully on a small scale.Gesell. History of economic ideas, monetary utopia, local currencies. 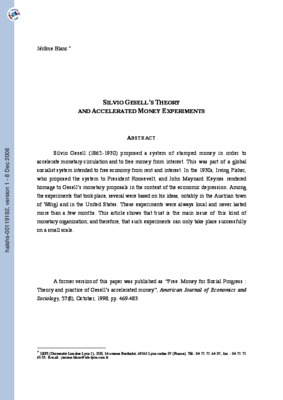