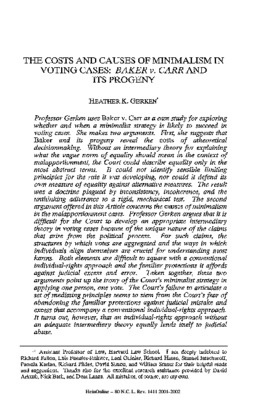 The Costs and Causes of Minimalism in Voting Cases: Baker v. Carr and Its Progeny

Professor Gerken uses Baker v. Carr as a case study for exploring whether and when a minimalist strategy is likely to succeed in voting cases. She makes two arguments. First, she suggests that Baker and its progeny reveal the costs of atheoretical decisionmaking. Without an intermediary theory for explaining what the vague norm of equality should mean in the context of malapportionment, the Court could describe equality only in the most abstract terms. It could not identify sensible limiting principles for the rule it was developing, nor could it defend its own measure of equality against alternative measures. The result was a doctrine plagued by inconsistency, incoherence, and the unthinking adherence to a rigid, mechanical test. The second argument offered in this Article concerns the causes of minimalism in the malapportionment cases. Professor Gerken argues that it is difficult for the Court to develop an appropriate intermediary theory in voting cases because of the unique nature of the claims that arise from the political process. For such claims, the structures by which votes are aggregated and the ways in which individuals align themselves are crucial for understanding most harms. Both elements are difficult to square with a conventional individual-rights approach and the familiar protections it affords against judicial excess and error. Taken together, these two arguments point up the irony of the Court\u27s minimalist strategy in applying one person, one vote. The Court\u27s failure to articulate a set of mediating principles seems to stem from the Court\u27s fear of abandoning the familiar protections against judicial mistake and excess that accompany a conventional individual-rights approach. It turns out, however, that an individual-rights approach without an adequate intermediary theory equally lends itself to judicial abus