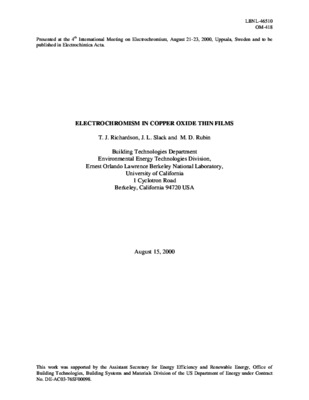 Transparent thin films of copper(I) oxide prepared on conductive SnO2:F glass substrates by anodic oxidation of sputtered copper films or by direct electrodeposition of Cu2O transformed reversibly to opaque metallic copper films when reduced in alkaline electrolyte. In addition, the same Cu2O films transform reversibly to black copper(II) oxide when cycled at more anodic potentials. Copper oxide-to-copper switching covered a large dynamic range, from 85% and 10% photopic transmittance, with a coloration efficiency of about 32 cm2/C. Gradual deterioration of the switching range occurred over 20 to 100 cycles. This is tentatively ascribed to coarsening of the film and contact degradation caused by the 65% volume change on conversion of Cu to Cu2O. Switching between the two copper oxides (which have similar volumes) was more stable and more efficient (CE = 60 cm2/C), but covered a smaller transmittance range (60% to 44% T). Due to their large electrochemical storage capacity and tolerance for alkaline electrolytes, these cathodically coloring films may be useful as counter electrodes for anodically coloring electrode films such as nickel oxide or metal hydrides