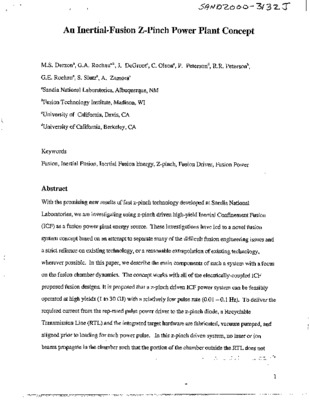 With the promising new results of fast z-pinch technology developed at Sandia National Laboratories, we are investigating using z-pinch driven high-yield Inertial Confinement Fusion (ICF) as a fusion power plant energy source. These investigations have led to a novel fusion system concept based on an attempt to separate many of the difficult fusion engineering issues and a strict reliance on existing technology, or a reasonable extrapolation of existing technology, wherever possible. In this paper, we describe the main components of such a system with a focus on the fusion chamber dynamics. The concept works with all of the electrically-coupled ICF proposed fusion designs. It is proposed that a z-pinch driven ICF power system can be feasibly operated at high yields (1 to 30 GJ) with a relatively low pulse rate (0.01-0.1 Hz). To deliver the required current from the rep-rated pulse power driver to the z-pinch diode, a Recyclable Transmission Line (RTL) and the integrated target hardware are fabricated, vacuum pumped, and aligned prior to loading for each power pulse. In this z-pinch driven system, no laser or ion beams propagate in the chamber such that the portion of the chamber outside the RTL does not need to be under vacuum. Additionally, by utilizing a graded-density solid lithium or fluorine/lithium/beryllium eutectic (FLiBe) blanket between the source and the first-wall the system can breed its own fuel absorb a large majority of the fusion energy released from each capsule and shield the first-wall from a damaging neutron flux. This neutron shielding significantly reduces the neutron energy fluence at the first-wall such that radiation damage should be minimal and will not limit the first-wall lifetime. Assuming a 4 m radius, 8 m tall cylindrical chamber design with an 80 cm thick spherical FLiBe blanket, our calculations suggest that a 20 cm thick 6061-T6 Al chamber wall will reach the equivalent uranium ore radioactivity level within 100 years after a 30 year plant operation. The implication of this low radioactivity is that a z-pinch driven power plant may not require deep geologic waste storage