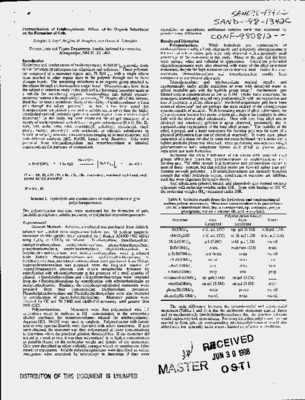 Polymerization of trialkoxysilanes. Effect of the organic substituent on the formation of gels

Hydrolysis and condensation of trialkoxysilanes, R-Si(OR{prime}){sub 3}, generally leads to the formation of silsesquioxane oligomers and polymers. These polymers are composed of a monomer repeat unit, [R-SiO{sub 1.5}]{sub n}, with a single silicon atom attached to other repeat units in the polymer through one to three siloxane bonds. The remaining substituent is an organic group attached to the silicon through a silicon-carbon single bond. Silsesquioxanes have been the subject of intensive study in the past and are becoming important again as a vehicle for introducing organic functionalities into hybrid organic-inorganic materials through sol-gel processing. Despite all of this interest, there has not been a systematic study of the ability of trialkoxysilanes to form gels through the sol-gel process. In fact, it has been noted that silsesquioxanes are generally isolated as soluble resins rather than the highly crosslinked network polymers (gels) one would expect from a tri-functional monomer. In this study, the authors have examined the sol-gel chemistry of a variety of trialkoxysilanes with different organic substituents (R = H, Me, Et, n-Pr, i-Pr, n-Bu, i-Bu, t-Bu, n-octadecyl, n-dodecyl, cyclohexyl, vinyl, phenyl, benzyl, phenethyl), with methoxide or ethoxide substituents on silicon, at varying monomer concentrations ranging up to neat monomer, and with different catalysts (HCl, NaOH, formic acid, fluoride). Gels were prepared from tetramethoxysilane and tetraethoxysilane at identical concentrations for purposes of comparison