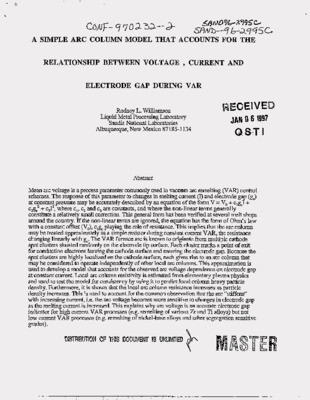 A simple arc column model that accounts for the relationship between voltage, current and electrode gap during VAR

Mean arc voltage is a process parameter commonly used in vacuum arc remelting (VAR) control schemes. The response of this parameter to changes in melting current (I) and electrode gap (g{sub e}) at constant pressure may be accurately described by an equation of the form V = V{sub 0} + c{sub 1}g{sub e}I + c{sub 2}g{sub e}{sup 2} + c{sub 3}I{sup 2}, where c{sub 1}, c{sub 2} and c{sub 3} are constants, and where the non-linear terms generally constitute a relatively small correction. If the non-linear terms are ignored, the equation has the form of Ohm`s law with a constant offset (V{sub 0}), c{sub 1}g{sub e} playing the role of resistance. This implies that the arc column may be treated approximately as a simple resistor during constant current VAR, the resistance changing linearly with g{sub e}. The VAR furnace arc is known to originate from multiple cathode spot clusters situated randomly on the electrode tip surface. Each cluster marks a point of exist for conduction electrons leaving the cathode surface and entering the electrode gap. Because the spot clusters re highly localized on the cathode surface, each gives rise to an arc column that may be considered to operate independently of other local arc columns. This approximation is used to develop a model that accounts for the observed arc voltage dependence on electrode gap at constant current. Local arc column resistivity is estimated from elementary plasma physics and used to test the model for consistency by using it to predict local column heavy particle density. Furthermore, it is shown that the local arc column resistance increases as particle density increases. This is used to account for the common observation that the arc stiffens with increasing current, i.e. the arc voltage becomes more sensitive to changes in electrode gap as the melting current is increased. This explains why arc voltage is an accurate electrode gap indicator for high current VAR processes but not low current VAR processes