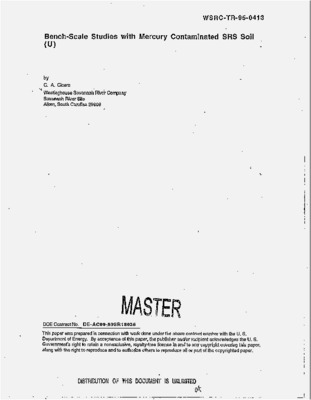 Bench-scale studies with mercury contaminated soil were performed at the SRTC to determine the optimum waste loading obtainable in the glass product without sacrificing durability, leach resistance, and processability. Vitrifying this waste stream also required offgas treatment for the capture of the vaporized mercury. Four soil glasses with slight variations in composition were produced, which were capable of passing the Product Consistency Test (PCT) and the Toxicity Characteristic Leaching Procedure (TCLP). The optimum glass feed composition contained 60 weight percent soil and produced a soda-lime-silica glass when melted at 1,350 C. The glass additives used to produce this glass were 24 weight percent Na{sub 2}CO{sub 3} and 16 weight percent CaCO{sub 3}. Volatilized mercury released during the vitrification process was released to the proposed mercury collection system. The proposed mercury collection system consisted of quartz and silica tubing with a Na{sub 2}S wash bottle followed by a NaOH wash bottle. Once in the system, the volatile mercury would pass through the wash bottle containing Na{sub 2}S, where it would be converted to Hg{sub 2}S, which is a stable form of mercury. However, attempts to capture the volatilized mercury in a Na{sub 2}S solution wash bottle were not as successful as anticipated. Maximum mercury captured was only about 3.24% of the mercury contained in the feed. Mercury capture efforts then shifted to condensing and capturing the volatilized mercury. These attempts were much more successful at capturing the volatile mercury, with a capture efficiency of 34.24% when dry ice was used to pack the condenser. This captured mercury was treated on a mercury specific resin after digestion of the volatilized mercury