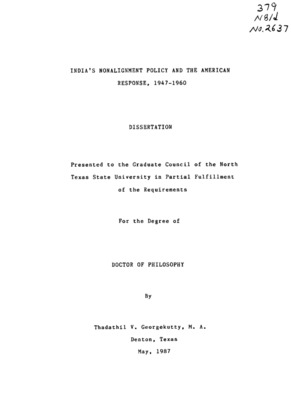 India's nonalignment policy attracted the attention of many newly independent countries for it provided an alternative to the existing American and Russian views of the world. This dissertation is an examination of both India's nonalignment policy and the official American reaction to it during the Truman-Eisenhower years. Indian nonalignment should be defined as a policy of noncommitment towards rival power blocs adopted with a view of retaining freedom of action in international affairs and thereby influencing the issue of war and peace to India's advantage. India maintained that the Cold War was essentially a European problem. Adherence to military allliances , it believed, would increase domestic tensions and add to chances of involvement in international war, thus destroying hopes of socio-economic reconstruction of India. The official American reaction was not consistent. It varied from president to president, from issue to issue, and from time to time. India's stand on various issues of international import and interest to the United States such as recognition of the People's Republic of China, the Korean War, the Japanese peace treaty of 1951, and the Hungarian revolt of 1956, increased American concern about and dislike of nonalignment. Many Americans in high places regraded India's nonalignment policy as pro-Communist and as one that sought to undermine Western collective security measures. Consequently, during the Truman and Eisenhower presidencies the United States took a series of diplomatic, military, and economic measures to counter India's neutralism. America refused to treat India as a major power and attempted to contain its influence on the international plane by excluding it from international conferences and from assuming international responsibilities. The Russian efforts to woo India and other nonaligned countries with trade and aid softened America's open resistance to India's nonalignment. As a result, although tactical, a new trend in America's dealings with India was visible during the closing years of Eisenhower's presidency. Therefore, America sought to keep nonaligned India at least nonaligned by extending economic aid