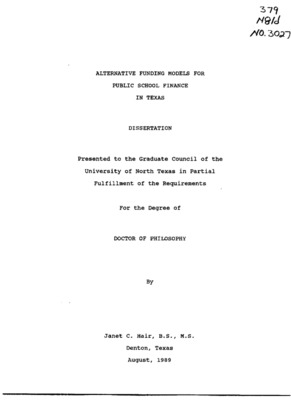 This study examined different funding methods for financing public education in order to solve the problems associated with large numbers of school districts and great disparities in property wealth without abandonment of property tax as the major revenue source. Using enrollment and State Property Tax Board data for the 1,061 school districts in Texas in 1986-87, four alternative funding plans were studied to compare the equity and fiscal impact of each on public school finance in Texas. The state and local shares of the total cost of education were computed using a combination of three per-pupil expenditure levels and four funding formulas. The per-pupil expenditure levels used were $3,850, $4,200, and $4,580. The formulas used were representative of a full state funding plan, a percentage equalization plan, a power equalization plan, and a foundation school program plan.\ud Since each of the four plans used significantly higher per-pupil expenditure values, all required a greater monetary investment on the part of the state. However, all plans were found to be equalizing in nature if set per-pupil expenditure values were maintained and no local enrichment was permitted. In addition, each of the four plans, as studied, met the fiscal neutrality standard of the 1987 Edqewood v. Kirbv case. The percentage and power equalization plans required less monetary investment on the part of the state than either full state funding or the foundation school program.\ud As a result of the study, it is recommended that the state consider a combination of plans. For example, the state could employ a full state funding model up to the $3,850 per-pupil expenditure level with added permissible local millage being limited and power equalized. In addition, while each of the plans studied reduces inequity, the increased cost of an adequate public school education suggests that the state consider other sources of revenue to fund public education. These could include personal or corporate income taxes