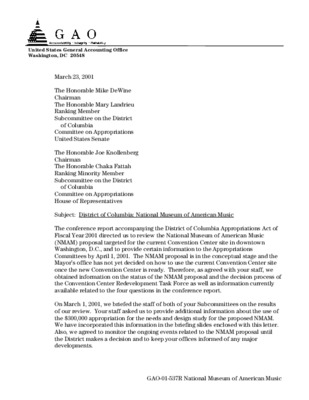 Correspondence issued by the General Accounting Office with an abstract that begins "GAO reviewed the non-profit and non-partisan Federal City Council's (FCC) proposal to use the current site of the Washington Convention Center for the National Museum of American Music (NMAM). The FCC proposal which is now in the conceptual stage anticipates that NMAM will be located at the existing Convention Center site and that it will be part of a major mixed-use complex that includes retail, entertainment, and performance venues. The total estimated cost for FCC's mixed-use proposal is $1.1 billion, with $172.5 million attributed to the music museum. The proposal estimates that the District would receive annual land rent of $13 million, equivalent to a seven-percent return on the estimated land value of $183 million. FCC spent $300,000 in federal appropriations on the project management services provided by the Smithsonian Institution. The District of Columbia has not yet considered any proposals for the use of the Convention Center site. The Mayor has established a task force to study the possible uses for the site, and it is developing a process to both solicit and evaluate independently generated proposals for the site.