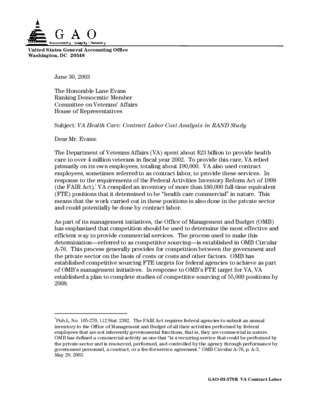 Correspondence issued by the General Accounting Office with an abstract that begins "The Department of Veterans Affairs (VA) spent about $23 billion to provide health care to over 4 million veterans in fiscal year 2002. To provide this care, VA relied primarily on its own employees, totaling about 190,000. VA also used contract employees, sometimes referred to as contract labor, to provide these services. In response to the requirements of the Federal Activities Inventory Reform Act of 1998 (the FAIR Act), VA compiled an inventory of more than 180,000 full-time equivalent (FTE) positions that it determined to be "health care commercial" in nature. This means that the work carried out in these positions is also done in the private sector and could potentially be done by contract labor. As part of its management initiatives, the Office of Management and Budget (OMB) has emphasized that competition should be used to determine the most effective and efficient way to provide commercial services. The process used to make this determination--referred to as competitive sourcing--is established in OMB Circular A-76. This process generally provides for competition between the government and the private sector on the basis of costs or costs and other factors. OMB has established competitive sourcing FTE targets for federal agencies to achieve as part of OMB's management initiatives. In response to OMB's FTE target for VA, VA established a plan to complete studies of competitive sourcing of 55,000 positions by 2008. RAND addressed limited aspects of the use of VA contract labor in a report that examined another subject. In that report, RAND found that increased use of contract labor appeared to decrease the overall costs at VA health care facilities. However, the report's finding differed from the interim finding that RAND briefed Congressional staff on earlier. In that briefing, RAND stated that contracting for labor could result in higher, rather than lower, VA health care facility costs. Because of this difference in RAND's findings and ongoing concerns about the impact of using contract labor at VA, Congress asked us to (1) determine what data RAND used in its contract labor analysis, (2) explain why RAND's final and interim findings differed regarding the effect of using contract labor on facility costs, and (3) assess whether RAND's report finding provides an adequate basis for making competitive sourcing decisions.