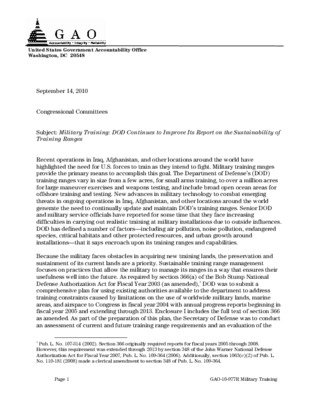 Military Training: DOD Continues to Improve Its Report on the Sustainability of Training Ranges

Correspondence issued by the Government Accountability Office with an abstract that begins "Recent operations in Iraq, Afghanistan, and other locations around the world have highlighted the need for U.S. forces to train as they intend to fight. Military training ranges provide the primary means to accomplish this goal. The Department of Defense's (DOD) training ranges vary in size from a few acres, for small arms training, to over a million acres for large maneuver exercises and weapons testing, and include broad open ocean areas for offshore training and testing. New advances in military technology to combat emerging threats in ongoing operations in Iraq, Afghanistan, and other locations around the world generate the need to continually update and maintain DOD's training ranges. Senior DOD and military service officials have reported for some time that they face increasing difficulties in carrying out realistic training at military installations due to outside influences. DOD has defined a number of factors--including air pollution, noise pollution, endangered species, critical habitats and other protected resources, and urban growth around installations--that it says encroach upon its training ranges and capabilities. Because the military faces obstacles in acquiring new training lands, the preservation and sustainment of its current lands are a priority. Sustainable training range management focuses on practices that allow the military to manage its ranges in a way that ensures their usefulness well into the future. As required by section 366(a) of the Bob Stump National Defense Authorization Act for Fiscal Year 2003 (as amended), DOD was to submit a comprehensive plan for using existing authorities available to the department to address training constraints caused by limitations on the use of worldwide military lands, marine areas, and airspace to Congress in fiscal year 2004 with annual progress reports beginning in fiscal year 2005 and extending through 2013. Enclosure I includes the full text of section 366 as amended. As part of the preparation of this plan, the Secretary of Defense was to conduct an assessment of current and future training range requirements and an evaluation of the adequacy of DOD's current range resources to meet those requirements. The plan was also to include: (1) proposals to enhance training range capabilities and address any shortfalls in resources identified pursuant to that assessment and evaluation; (2) goals and milestones for tracking planned actions and measuring progress; (3) projected funding requirements to implement planned actions; and (4) designation of an office in the Office of the Secretary of Defense and in each of the military departments responsible for overseeing implementation of the plan.