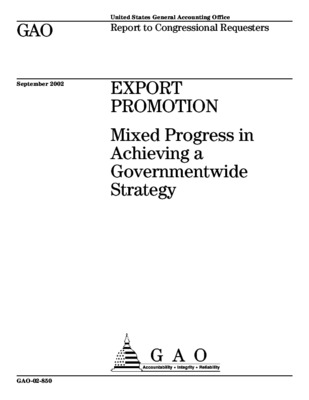 A letter report issued by the General Accounting Office with an abstract that begins "Ten years ago, to coordinate the activities of the various federal agencies involved in export promotion and to ensure better delivery of services to potential exporters, Congress established the interagency Trade Promotion Coordinating Committee (TPCC) under the Export Enhancement Act of 1992. Among other things, the act required the committee to develop a governmentwide strategic plan that (1) establishes priorities for federal activities in support of U.S. export activities and (2) proposes the annual, united federal trade promotion budget that supports the plan. TPCC's annual national export strategies identify broad priorities for promoting U.S. trade, but they do not discuss agencies' specific goals or assess progress made. In its initial strategies, the committee identified 10 regionally dispersed priority markets for future trade promotion efforts, but it did not discuss agencies' specific goals or report later on progress made in increasing exports to these markets. Shifting to a regional approach 3 years later in its 1997 strategy, the committee identified Central and Eastern Europe as a region where U.S. government assistance to U.S. exporters would be important in increasing market share. Again the strategy did not discuss agencies' specific goals nor did later strategies report on progress made or even cover consistent topics from year to year. Without regular assessments of progress, it is not clear whether export promotion resources are being used most productively in support of the strategy. Furthermore, the committee has limited ability to align agency resources with its strategy. The committee has made modest but inconsistent progress in coordinating federal agencies' export promotion efforts. In its first national export strategy in 1993, the committee identified coordination weaknesses and recommended improvements, most of which required interagency consensus to implement. Although many of its initial recommendations were implemented during the committee's first few years, some have not been implemented--for example, the need for improved agency staff training and improved trade information services to bring clarity to the export process, as well as the need for expanded outreach and trade education for new-to-export firms.